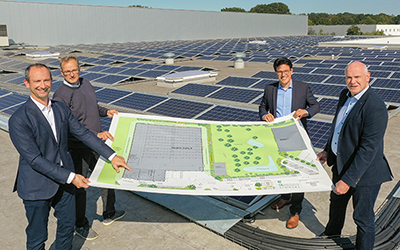 Green and cost-efficient: Having installed a photovoltaic system on the new distribution centre, the RHIEM Group is emitting around 700 tons less carbon dioxide per year. This means that the Group is further reducing its environmental footprint and investing in carbon-neutral production and services. 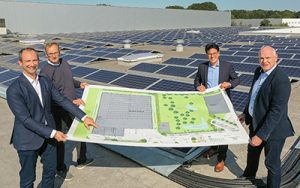 The clock is ticking: As of 01 January 2021, a new carbon tax will be imposed on companies. Under plans adopted by the German government, they are set to pay around 35 euro for every ton of carbon dioxide (CO2) which they release into the atmosphere through their economic activity. The RHIEM Group of Voerde has been thinking ahead and has therefore installed 2,776 solar panels on the flat roof of its new distribution centre which has been standing since 2018. These panels now produce an output of around 720 kilowatt-peak (kWp) per day. The generation of power from renewable sources of energy is an addition to the existing package of environmental protection measures in the interests of carbon-neutral production, processing of sustainable materials and waste heat recovery.

“The photovoltaic system is a key component in our energy management strategy,” explained Franz Rhiem, managing partner of the company which was founded in 1958 as a printing shop and is now a market leader in packaging production and fulfilment services in e-commerce for brand manufacturers and retailers. “This will enable us to produce 50 per cent of our electricity from solar energy independently in the future. We will achieve a reduction of 20 per cent in our electricity consumption for lighting by switching to light-emitting diodes (LED).”

612,000 kilowatt-hours of electricity from solar energy

RHIEM has invested more than three quarters of a million euro in green technology. This will help to cut costs and CO2 emissions. The photovoltaic system alone will enable the company to generate around 612,000 kilowatt-hours (kWh) of electricity per year, some of which will be fed into the public grid. By comparison, a two-person household consumes around 3,100 kWh a year.

The company will also reduce environmental pollution by cutting its annual CO2 emissions by 700 tons. The photovoltaic system will therefore bring an annual drop in CO2 emissions equivalent to an area of woodland the size of about 75 football pitches (54 hectares).

Not least, the German government wants to reduce CO2 emissions as part of its energy transition package, and one measure in its strategy is to impose a levy on these emissions from 2021 onwards. “The photovoltaic system is one building block in our approach to absorbing the rising costs and maintaining competitiveness,” added Franz Rhiem, “but it is much more important that the photovoltaic installations and our energy management targets are allowing us to make our contribution to preserving nature and slowing down climate change.”