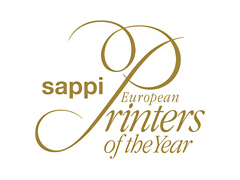 With „Video Deluxe 17 Plus HD“ retail box by MAGIX AG, RHIEM Druck GmbH wins the Gold Award in the renowned „European Printers of the Year 2012“ contest by Sappi in the category packaging & label.

In 2011 RHIEM Druck GmbH for the first time took part at the renowned „European Printers of the Year“ contest. This contest is initiated by Sappi, a global market leader in coated fine paper and cardboard materials. The contest, being held every two years, is open to all print enterprises in Europe and the Middle East. For this current period, more than 1500 applications in 11 categories and from 28 countries have been handed in over the past two years.

RHIEM Druck GmbH handed in a highly finished retail box „Video Deluxe 17 Plus HD“ by MAGIX AG. For it’s best-in-class print and finish, this product was awarded with the top prize by an independant international board of print experts. As Gold Award winner, RHIEM is automatically nominated for the „International Printers of the Year“ contest which is held between award winners from the various global regions.

„MAGIX‘ high standards in product quality are also reflected in the quality of MAGIX packaging at the point of sale. RHIEM has proven to be a reliable partner for us, meeting and exceeding those high standards. Congratulations for being awarded by Sappi“, says Erhard Rein, Senior Vice President MAGIX AG.

Dirk Nondorf, Managing Director RHIEM Druck GmbH: „Congratulations to the entire team. This award recognizes the high standards which are performed every day through our production processes. Our special thanks certainly goes to the MAGIX‘ graphical design team. The physical result of a printed MAGIX retail box can only be as good as its graphical and conceptual design. We are all very proud that MAGIX‘ retail boxes are considered to be the best and most ambitious retail boxes in Europe.“

About MAGIX AG
MAGIX is a global market leader for high quality software, online services and digital content for purposes of multimedia communication. Headquartered in Germany, developing, producing and distributing multimedia software since 1993, MAGIX today operates subsidiaries in the USA, Canada, UK, France, Italy, Spain and the Netherlands. The product portfolio – both PC based and online- resp. mobile services – addresses the needs of private users as well as professionals.
According to retail sales figures, MAGIX is the market leader in the field of multimedia software in Germany and in the most important European markets, and is also regarded as one of the most successful market participants in the USA. 15 years of retail presence and more than 1000 awards proof MAGIX‘ innovation. For more information, please visit: www.magix.com

About RHIEM
RHIEM is an owner-run fulfilment services company with existing company structures in North America, Asia and Europe. Founded in 1958 as a printing firm, today the company has grown into a global service provider and consists of four business divisions: RHIEM Druck (printing), RHIEM Services, RHIEM Intermedia and PPS Solutions. The company’s German headquarters cover an area of over 40,000 m² with a 450-strong motivated workforce. The Group has a further eight bases in Asia and North America. Further details can be found at: www.rhiem.com